Travelling to Fes – Fes Tours – What to do in Fes?

Guided tours in Fes | 1 or 2 day excursions from Fes 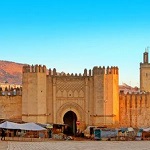 This imperial city is the capital of the traditional Moroccan culture. Its magnificent madrassas are the most prominent symbol of the city. An entire day will be dedicated to visit the spiritual and cultural capital of the Kingdom. You will have the opportunity to visit the religious, artistic and intellectual Morocco. You’ll see the oldest Medina, the Medersas of Cherratine and El-Attarine (Arabian style building dedicated to religious studies) the Quaraouiyine University: which is the oldest still functioning in the world, and the Nejjarine fountain.
After lunch, you will visit the different souks with various artisans such as the famous district of the tanners, and the Mechouar of the Royal Palace. 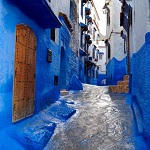 We depart from Fes to travel to Chefchaouen, the blue city founded in the fifteenth century by Nazari Granada and it is a reflection of his Lost Paradise; a revived dream of winding streets, centuries-old mosques and water noises between its old stones.
This mountainside city has the most charming medina located within ancient walls, divided into six neighbourhoods, each one a reflection of its inhabitants, the Spanish or Andaluz part being built from 1492, and Sueka from 1471, which hold the old Kasbah.

The origins of Chefchaouen date back to the Reconquista of Granada when many were exiled from Andalucía and the Kingdom of Granada.
After exploring this labyrinth of small streets you will spend the night in a central Riad in the medina and in the morning you will have some free time to enjoy the city and we will start on our way back to Fes around 12 noon.

Volubilis is an ancient Roman city where the best preserved archaeological remains are and is the most visited site in Morocco. The area was declared a World Heritage Site by UNESCO in 1997. It occupies 40 hectares and is located 33 kilometres north of Meknes.
Although it’s better to walk slowly discovering the ruins, there are some points that you should not miss, like the forum, the basilica and the temple of Jupiter, the baths, the arch of Caracalla and the beautiful mosaics. Optional guided visit.
Meknes is the most modest of the four imperial cities of Morocco, which makes it a different place, much more quiet and relaxed than Fes, Marrakech and Rabat. Meknes is surrounded by fields, agricultural products being one of the foundations of the economy of the city. Interestingly, this region produces the largest quantity of wine in Morocco, which is already a surprise, since Muslims are forbidden to drink alcohol.
There we can visit its souks, The Place el-Hedim (which is in Meknes what Jemaa el Fna is in Marrakech), the Dar Jamai Museum, the Mausoleum of Moulay Ismail and the Madrasa Bou Inania. 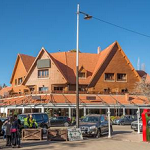 Ifrane is a village in the mountains located 65 kilometres south of Fes. Clean and tidy, Ifrane has parks, lakes and alpine-style homes, so it is known as “the little Switzerland of Morocco”. Ifrane is situated in a mountainous area, 1713 meters high and has a cold climate, which has influenced its amazing region, more typical of a Central European city than of an African one.
In addition, this climate has made Ifrane a great tourist destination for Moroccan families who go there to ski and practice other winter sports. In Ifrane there is the Al Khawayn University, one of the most renowned in Morocco and most expensive in the country due to its luxurious campus.

The Ifrane National Park is also really representative of the biodiversity of the Middle Atlas. It has lush woodlands and ancient forests with gushing rivers that converge at the source: a magnificent location. One of the animals that once lived there was the Atlas lion, so it has become the emblem of the village and a huge stone carving is often photographed in the village. The region is also home to the Barbary apes that live in the cedar forest.
It has a rich flora and fauna which includes many species of birds of prey. Azrou is a town in Morocco famous for its craftsmanship in carpets. It is located southeast of Meknes and its name derives from the word that in Berber language means “stone”.