Excursions from Ouarzazate of 1 or several days 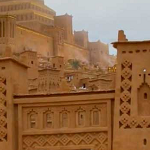 This vast desert plateau attracts tourists from many different nationalities. Under the palm trees, Ouarzazate was built leaving behind her a vast rocky plateau swept by all the winds of Sahara. In summertime the temperature can easily reach 45 ° C, and in the winter months we can admire the snowy peaks of the High Atlas Mountains. It also takes advantage of its contrasts to attract many visitors, filmmakers, and adventure hungry tourists, writers who seek serenity and tranquillity, and those who only want to spend good holidays.

Ouarzazate is also known as the Hollywood of Morocco. It has several film studios that could be cited “The Atlas Corporation Studio” and “Kanzaman” the latter is not accessible to tourists during the period of filming. The oases and mountains close around Ouarzazate, the Kasbahs, the splendid and architectural vestiges with stepped walls and large towers, will transport you into a world where time seems to have stopped. The combination of the varied landscapes and mountains, the colours and ancient buildings make this an impressive day trip.