Tour to know the Imperial Cities and the Desert

You will be picked up at the airport in Casablanca. We’ll visit the Hassan II mosque, a remarkable building in a beautiful setting. We depart for Rabat which is the administrative capital of Morocco and also on the Atlantic seaboard. There we will visit the city and its monuments: the Oudayas, Alcazaba, the Mausoleum of Mohammed V and the Hassan Tower. Overnight will be in a hotel in Rabat. 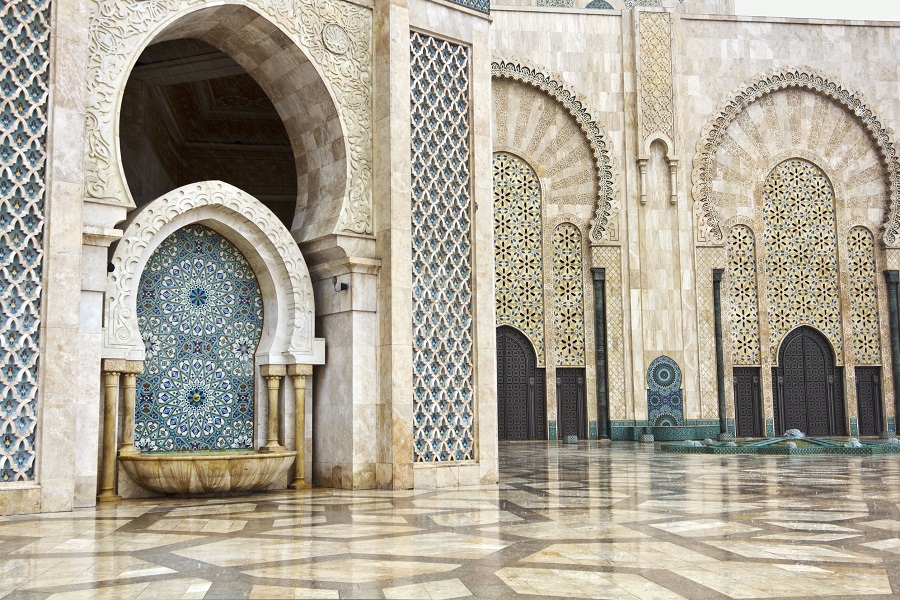 After breakfast we will leave the coast and drive inland to the Imperial City of Meknes which borders the forest of Mamora. The city reached its peak thanks to Sultan Moulay Ismail and has a beautiful blue gate called Bab Mansour.
A short drive brings us out into the countryside and to the extensive ruins of the Roman city of Volubilis just 27 km from Meknes. We will also visit the holy city of Moulay Idriss and continue to reach the Imperial City and ancient medinas of Fes. Overnight will be at a hotel in Fes.

Today will be a full day dedicated to discovering the intellectual city of the kingdom. With around 9000 streets in the medina of Fes el Bali it is recommended to visit with a knowledgeable guide to find the way and to earn about its history and heritage. There are many old koranic schools to visit, palaces, museums and mosques.
The oldest university in the world that is still in use is in Fes: the Quaraouiyine Mosque. There are also many fountains as each neighbourhood has one and of course the souks and artisan quarters. Night with bed and breakfast in Fes.

From Fes we will drive to the Middle Atlas to visit Ifrane, known as the little Switzerland of Africa because of its alpine architecture. The next town will be Azrou, “the rock”, a Berber village known for its handicrafts, carpets and wood sculpture, then, we will drive to Midelt: famous for its production of apples.
We will take the route through Tizi n´Talghemt at 1907 meters high. The landscape there is breath-taking: the mountains are completely bereft of vegetation, covered with a purple coat. We will arrive in Errachidia and drive through Tafilalet Mountains to the Erfoud palm grove. Travelling south we are on the way to the Sahara desert where we will be spending the night in the highest dunes in north of Africa: Erg Chebbi.

After breakfast we depart towards the palm grove of Rissani and Jorf located on the right of the Ziz River, then to the Ksar of Touroug, surrounded by a spectacular oasis. We will also visit Tinejdad and Tinerhir. After lunch we will take a walk through the Todra Gorge and the beautiful Boumalne Dades Valley visiting Kelaat M´gouna and the Valley of Roses: during the month of May there is a festival to celebrate the harvest of the Damascus roses that grow in this valley. We will continue until we arrive in Ouarzazate and have the chance to visit the Kasbah Taourirt that was once a residence of the Pacha of Marrakech. We will sleep in a charming riad in the city.

After breakfast we will go to Marrakesh through the High Atlas Mountain pass of Tizi n´Tichka at 2260 metres altitude. The route passes many Berber villages and is a particularly twisty road that offers spectacular panoramic vistas with lots of colours down to the plains of Haouz. Overnight in a riad in Marrakech.

In the morning you will visit the city that gave its name to Morocco. It extends to the majestic Atlas Mountains which are snow-capped early in the year. Its heritage is linked to the various dynasties that lived there and its political, economic and cultural traditions and its history. Marrakech is also the show city, where a permanent party is seen in the famous Jemaa el Fna square, which for several centuries has been the most incredible popular theatre in the world: snake charmers, musicians, dancers, storytellers, fortune tellers, actors and food stall holders gather together to create this amazing experience.
In Marrakech there are countless places to visit; the Medersa of Ben Youssef, the Menara gardens, the Dar Si Said Museum, the Agdal garden, the Saadian Tombs and Palaces Badi and Bahia to name some. You will have the afternoon free to explore and shop in the souks and have dinner at the famous square. Night in a Riad.

Today you will have some free time to explore and do some shopping until it is time for the transfer to the airport for your flight departure.

Tour to know the Imperial Cities and the Desert.